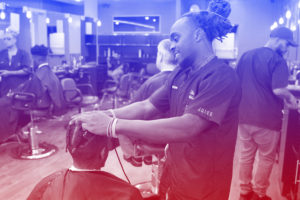 LaBarberia Institute of Hair, the Cleveland Barber College has been recognizing our stylists with a monthly student spotlight, for their talents, ambition, and hard work. For the month of September we would like to acknowledge William Harper.

A Bedford High School graduate who grew up in in Cleveland, Ohio, William calls himself a Jack of all trades. Six years ago William and his brother, Keon Williams opened a fitness gym called Flow Fitness and Health. He also pours concrete which has been something he grew up around since his father also worked in the construction industry.

William has been cutting hair for his family for a very long time. His fiancé and brother encouraged him to get his license so he enrolled at LaBarberia. Mastering the overall craft, and getting familiar with all of the cuts has been the most challenging but also a great feeling once achieved. He was also honored to put on student council at LaBarberia.

Williams plan is to work in a barber shop for a year or so after graduating. He would ultimately like to brand his fitness shop and barbering skills into one. He loves the art of making people smile. On his down time he enjoys working out, spending time with his daughter and family, along with getting active in the community and giving back.